[Look, something brought you to this blog post. If it was a mistake—sorry. But if you’d like to see something that is probably more worth your time, please check out the blurb about my soon-to-be-published novel on my new website. It’s basically about seeing a different perspective of Jesus, through the eyes of some background characters in the Bible. New website: cjpenn.com] 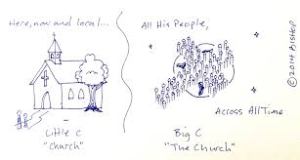 My friend had just been to a potluck dinner, the house filled with good food and great friends. Everyone attended the same church. As the evening progressed, little discussion groups started forming. As my friend later told me, the discussions in each group all followed a similar theme.

My reaction is sadness. I think Jesus and His true Church deserve more attention. Am I making too big a deal out of this? Maybe. What do you think?

“We Called Him Yeshua,” now Available on Amazon. Paperback and ebook currently with reduced pricing.

Get to know Jesus Christ from a new perspective. See the “son of man” from the perspective of those who’s hearts he touched the most.