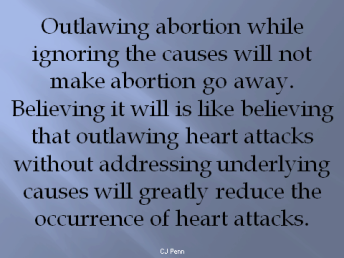 Having laws or legal precedence that supports abortion doesn’t cause abortion. Outlawing abortion while ignoring the causes won’t make abortion go away. Believing it will is like believing that outlawing heart attacks without addressing underlying causes will greatly reduce the occurrence of heart attacks.

Abortion is tragic, and not just for the fetus. Yet while celebrating the likely death of Roe v. Wade, many anti-abortion activists seem to ignore the causes of unwanted pregnancies that end in abortion. Here are a few of those causes:

Other than that last one, these causes could all be avoided, and thereby greatly reduce the occurrence of unwanted pregnancies that result in abortions. Now to be clear, these first five causes aren’t really causes—they’re results of a deeper root cause. Still, many anti-abortion activists would rather outlaw abortion and not deal with the causes. Or so it appears.

One particularly large and vocal group of anti-abortion activists are those who call themselves Christian. Those first five causes I listed are in the middle of what should be the Christian sphere of influence. I believe Jesus wants Christians to do more than demand an end to abortions—He wants them to do something about these causes, by dealing with the deeper root cause.

Jesus calls us Christians to be witnesses of His truth, which is all about a new way to live a life of faith, love, forgiveness, humility, denial of self, and surrender to the Spirit of God. Our Jesus-given mission is to, “go and make disciples of all nations.” (Matthew 28:19). If Christians would focus on that—instead of scaring people away from Christianity with their harsh rhetoric, judgment, hypocrisy, and apparent lack of love for those who are different from themselves—abortion rates would go down. The infant lives the anti-abortionists supposedly want to save would be saved.

But it seems some so-called Christians would rather continue using the abortion issue as a political bat to beat people over the head. And when I see how these Christians appear to care for the life of an unborn child while at the same time not showing any concern for the other victims in these situations, well, they don’t look very Christian to me. I don’t see much in the way of humility, love, forgiveness, and compassion for the mothers. Instead, and as indicated by the state that recently tried to enact a law making aborting mothers guilty of homicide, many anti-abortionists see these mothers as criminals. They forget, or just don’t want to accept, that the mothers are victims too. They seem to also ignore that there’s always someone else involved in the pregnancy. Maybe ignoring the father is another sign of the influence of white male supremacy in our society, (but that’s a topic for someone else to tackle).

Here’s another thought. In looking at some of the images floating around social media these days, I often see a phrase used by pro-choice activists: “My body, my choice.” Sounds fair, sounds just. And sounds familiar, as that phrase has often been used by anti-mask and anti-vax activists. Instead of outlawing abortion, how about if Christians did their Jesus-given job and showed people they have other choices for what they do with their body, like protecting themselves and others from unwanted pregnancies. And along with that, Christians could be examples to people of the help Jesus can provide in making those better choices. Instead of using intimidation, harsh rhetoric, and laws, how about these Christians try to influence choices with love and compassion? That’s what Jesus would do. But again, it seems these so-called Christians would rather rely on manmade laws than the truth and power of Jesus Christ and the Holy Spirit.

And do anti-abortionists really care about the sanctity of life? If so, instead of forcing new civil laws, they should promote such things as character, morality, humility, obedience, and love. That’s also what Jesus would do. One way all anti-abortionists could help encourage such character traits is to exhibit these traits in their own lives.

Yet for many Christians, especially the more politically boisterous ones, the picture they paint with their words, actions, and the way they vote, shows that character and morality does not matter. It seems many so-called Christians are happy to force their ideas of morality upon others, while at the same time supporting a politician who is mostly, or completely, immoral. In this way, many Christian anti-abortionists paint an image of Christianity that’s repulsive. And in doing that, they hinder any progress towards fixing the root cause of abortion.

And not to get too deep into the truth of what Christianity is all about, but Christians are called to deny our self and surrender our bodies as a living sacrifice to the Holy Spirit of God (e.g., Romans 12:1). Also, while praying to God, Jesus said, “I have made you known to them, and will continue to make you known in order that the love you have for me may be in them and that I myself may be in them.” (John 17:26) And Jesus said to us, “Remain in me, as I also remain in you.” (John 15:4)

Jesus, by the indwelling presence of His Spirit, could show Christians how to best deal with the first five causes I mentioned—He can show them the truth and reality of the deeper root cause. And with more and more people sharing their bodies with Jesus, with the Spirit of Jesus living in them and influencing how they use their bodies, I suspect abortion would naturally fad away, without the need for Supreme Court rulings.

Now I’ve used the term anti-abortion because, as a friend pointed out to me, pro-life is not an accurate label. Oh, these people appear to care about the life of an unborn baby. But their words, actions, and how some of them vote, indicate they don’t care about all human life. So it’s hard for me to refer to them as pro-life, since all they really seem to care about is themselves and forcing their idea of morality upon others.

And what’s that deeper root cause I’ve been referring to? Well, I think there’s more than one contributor to those things I listed that result in unwanted pregnancy. But the one that’s been on my mind as I write this is that so-called Christians often behave in very un-Christian ways. They embrace Jesus’ name, but not His truth. Just think about it.

Finally, imagine a day when more people live as true Christians sharing their lives with the Spirit of Jesus, when character and morality begin to matter more than pride and selfishness, when Christianity in the US starts growing rather than shrinking, when the rate of unwanted pregnancies shrinks rather than grows. That’s when Jesus might say to those Christians who help bring that day about, “On that day you will know that I am in My Father, and you are in Me, and I in you.” (John 14:20)

“We Called Him Yeshua,” now Available on Amazon. Paperback and ebook currently with reduced pricing.

Get to know Jesus Christ from a new perspective. See the “son of man” from the perspective of those who’s hearts he touched the most.