You know him by his Greek name, Jesus Christ. We see a lot in the Bible about Jesus’ story and his messages. But we rarely see the point of view of those whose lives Jesus changed with his acts of love and compassion. This soon-to-be-published novel tries to see Jesus and those times through the eyes of such people. 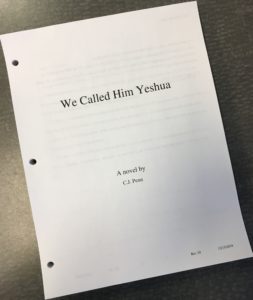 They knew Jesus by his Hebrew name, Yeshua. They knew his love not by the written word of an apostle or the spoken word of a preacher, but by Jesus’ hand on their shoulder, or the thrill of his healing touch freeing them of a disease, and his peace that filled them to overflowing.

We Called Him Yeshua is the story of Jesus as told from the perspective of these people—the ill and diseased, the deaf and blind, the worried and frightened, the overwhelmed and depressed—people who were in some ways just like you and me. And where we may know Jesus by his divinity, those who will tell this story knew him by his humanity. Their stories will show you both the Son of God, and the son of man.

Why might you want to know more about Jesus’ humanity? Well, as Anna, one of the lead characters, puts it:

My name is Anna and I’d like, along with Neri and the others, to tell you of our time with Yeshua. We’d like to show you how it was to feel his hand on your shoulder, how it felt to hear the calm in his voice, to actually feel the healing power of his words, and the intensity of his love. We’d like to show you his humanity, as well as his divinity.

Yet since you didn’t live with him, as we did, you may believe it’s impossible to know how it is to feel his humanity, his presence, his humility, and the depth of his love. But you know … it’s not that hard.”